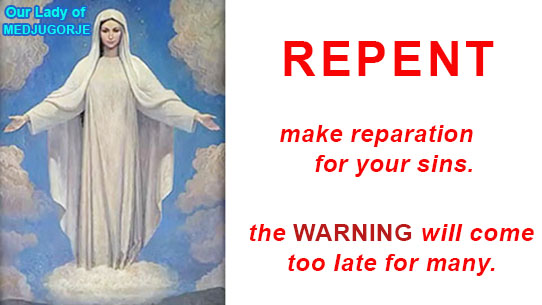 On 1981-May-13, feast day of Our Lady of Fátima, Pope John Paul II was shot and nearly killed by a 23-year-old Turkish man, Mehmet Ali Agca, in St. Peter’s Square in the Vatican. Later, John Paul said the Blessed Mother had saved his life by guiding the bullet away from his vital organs, as he publicly forgave his would-be assassin.

Forty two days after that, on 1981-June-24, Our lady appeared to six shepherd children in Medjugorje. Her first message was:

“Peace, Peace, Peace! Be reconciled! Make your peace with God and among yourselves. For that, it is necessary to believe, to pray, to fast, and to go to confession.”

Thus began the daily Apparition that continues up to today. In 1985-November, the seer Mirjana spoke:

“‘This period is the period of graces when many graces are given, it is the period of conversion. The second period will be a very painful purification process that will be for all humanity and at the end this encounter with Jesus will come and the visible sign will appear. . . This life has value, but in the face of eternal life, here on earth we are only passengers. “

It has been forty years now that Our Lady has been giving us Messages in Medjugorje. Mga kapatid, there is significance in the number 40, you must recognize this.

Mga kapatid, look around, see the signs, the floods, earthquakes, volcanoes, and look at the sky. . . The DOOR OF MERCY is now about to close. The WARNING is near, possibly you can count the days on your fingers, but it will come too late for many. In that hour, millions will die.

“Tell sinners that no one shall escape My Hand; if they run away from My merciful Heart, they will fall into My Just Hands. “ – DIARY of St. Faustina, #1728.

The ILLUMINATI now controls the world, they control all the governments and all the mainstream media, but most horrendously they control all the banks and all the moneys of the world. They will crash the economy, and all those who are attached to money, those who can’t live without money will find it necessary and will agree to the MICROCHIP. . . Mga kapatid, this is our PURIFICATION. Your God is not money, your God is the FATHER ALMIGHTY – you can’t choose both, only one. You must accept the situation, that you don’t have money, and you must not despair. Since the days of Abraham, GOD has been faithful all throughout the ages, HE has never abandoned HIS children. As HE feeds the birds, so we’ll be fed. For forty years HE provided the Israelites MANNA as they escape from Egypt.

There will be FAMINE. There will be no food, and hunger will cover the face of the earth. When it comes, all the moneys of the world will be rendered useless.

This year is the 40th year of the Medjugorje’s Marian Apparitions. In the life of Jesus, the Number 40 is epic:

• Matthew 4:1 – Jesus fasted for 40 days and 40 nights in the wilderness, and allowed Himself to be tempted by the devil.

• Acts 1:3 – After his Ressurection, Jesus appeared to his disciples and believers for 40 days and spoke about the Kingdom of God.

Number 40 in the Bible

The Old Testament of the Bible is also replete with the Number 40. It’s so many, here are just a few:

• Genesis 7:11 – “In the 600th year of Noah’s life, on the 17th day of the second month – on that day all the springs of the great deep burst forth, and the floodgates of the heavens were opened. And rain fell on the earth forty days and forty nights. “

• Exodus 16:34 – ” As the LORD commanded Moses, Aaron put the manna with the tablets of the covenant law, so that it might be preserved. The Israelites ate manna forty years, until they came to a land that was settled; they ate manna until they reached the border of Canaan.”

• Exodus 34:27 – ” Then the LORD said to Moses, ‘Write down these words, for in accordance with these words I have made a covenant with you and with Israel.’ Moses was there with the LORD forty days and forty nights without eating bread or drinking water. And he wrote on the tablets the words of the covenant – the Ten Commandments.”

• Numbers 32:13 – “The LORD’s anger burned against Israel and he made them wander in the wilderness forty years, until the whole generation of those who had done evil in his sight was gone.”

• Judges 13:1 – ” Again the Israelites did evil in the eyes of the LORD, so the LORD delivered them into the hands of the Philistines for forty years.”

• Jonah 3:3 – “Jonah obeyed the word of the LORD and went to Nineveh. Now Nineveh was a very large city; it took three days to go through it. Jonah began by going a day’s journey into the city, proclaiming, ‘Forty more days and Nineveh will be overthrown.’ The Ninevites believed God. A fast was proclaimed, and all of them, from the greatest to the least, put on sackcloth.”