The Many Flavors of Christianity

And so it was told Jesus came out of the bakery and proclaimed, “this is the Will of the FATHER that was handed down to Moses in two tablets of stone. I turned them into a pizza dough for everyone to eat and enjoy and be nourished up to eternity. This is the ultimate pizza, Christ Pizza,” as He pointed to the stack of pizza dough, plain and simple, clean, uncorrupted, and written on top is the Ten Commandments. 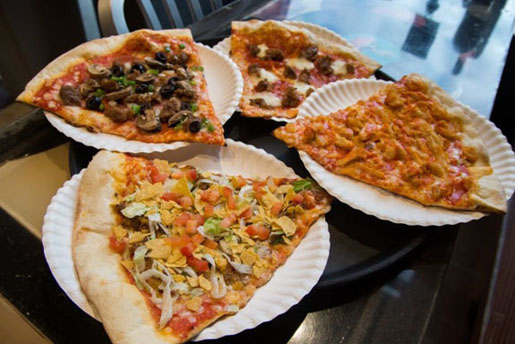 Satan, seeing the huge flock of Jesus followers, sneaked from behind and approached one of them, the flamboyant Apolonio, his shirt boldly printed with the words “Adopted Son of God”. Satan whispered to him, “take a piece of Christ Pizza, put toppings of pepperoni on it, and you can make a lot of money”. Apolonio followed at once. And right away, he began telling wonderful stories about that pepperoni that caught the attention of many. And when this pepperoni pizza is served inside the Karaoke bar, all the waters turned into wine. And should it dies, the prophecy is that this pepperoni will rise from the dead after three days. And as the people marveled, they parted their money, putting Apolonio in cloud nine. With this pizza, he just stepped on a gold mine. So he immediately renamed Christ Pizza as Apolonio Pizza, a totally new creation.

And Satan, pleased with Apolonio’s success, approached another, the wealthy merchant Michael V, the lone franchise-seller of the ‘mahiwagang payong na nakatikwas’, and popularized the song and dance, ‘saksak, laglag, hataw sa hatag!’. Again Satan whispered to him, “take a piece of Christ Pizza, put toppings of bacon and salami, and you can make a lot of money”. Mike V followed at once, and like Apolonio immediately began telling wonderful stories about the magical feats of these duo bacon and salami, how they raise their passports and wallets to the air while dancing the ‘saksak, laglag, kalag’, how together they clap three times and seven times, how together they bow three times and seven times, and many other marvelous performances no other bacon and salami can do. And it rained tons and tons of money, to the delight of Mike V, even though he almost got drowned with money.

Jesus, feeling sad and cheated, demanded a royalty of ten percent for the original Christ Pizza, but those clowns rejected Him and even denied they ever knew him.

“They claim to know God, but by their actions they deny him. They are full of meaningless talks and deceptions, only for the sake of dishonest gain. . .” – Titus 1:16.

And so Jesus bowed to his faithful flock, “let these pigs live on earth in luxury and self-indulgence, let them fatten themselves for the day of slaughter. I’m leaving for a while to prepare a big oven so I can bake these pigs in their fat, then I’ll come back asap.” – James 5:5.

And the flock asked, “Rabbi, when will that be, and what will be the Signs of your Coming?”

Jesus answered, “Look at the fig trees. When they sprout leaves, you can see that summer is near. Likewise, when you hear Bo Sanchez proclaims, “god has blessed me so I can bless you”, and when you see the crowd of El Shaddai dancing the ‘siksik, liglig, kilig’, and when you hear the INC claims, “kami lang ang maliligtas”, and when you see this heretical Pope Francis declares, “atheists who do good things are welcome in heaven”, then you know that the End is near – at the doors.”