LIVING PROOF that COVID-19 is a SHAM!: – the INVINCIBLE “BIN LADEN” of Nagcarlan! 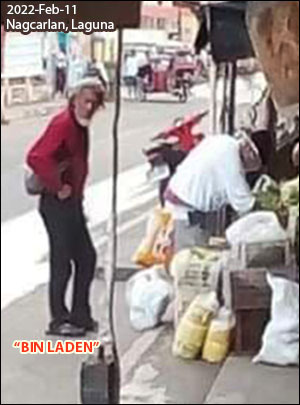 [Nagcarlan (Philippines), population: 80,000]. His name is ROBIN, about 60 years old, homeless, and a beggar (.. pardon me for the word) for the longest time, perhaps 10 or 15 years. But the Barangay Tagays in the area, in one of their Lambanog sessions, have all ratified that Robin will instead be called “BIN LADEN”. He is the only beggar in town, there’s no other, thus all the people of Nagcarlan even the small kids know him. He has survived it all – the super typhoons, earthquakes, volcanic eruptions, the DENGUE outbreaks, and now Covid-19. Whatever variant that is – the Alpha, Beta, Gamma, Lambda, Delta, or Omicron – all have failed to put him down, all proved unsuccessful to curtail him. To this day, Bin Laden has never worn a facemask, and he remains unvaxxed. The vaccinator won’t dare do it because, without considering the extra cotton, alcohol, and effort, it really takes guts to wipe clean the dirt off his arm. Bin Laden is indeed INVINCIBLE, and he’s UNVAXXED.

Bin Laden’s is not a unique story. It is true in all cities, not just in the Philippines, but in all the world. Throughout all those Covid variants, the homeless and the UNVAXXED have survived. This COVID PLANDEMIC failed to perish them. No one dropped dead on the street even as strong FULLY VAXXED ATHLETES are dropping dead right in the middle of the game. Instead of dwindling, their number even increased as many of those who were laid off from their jobs, because of the catastrophic lockdowns, have joined them on the streets. And absurdly, government offices at times are hampered, some even stopping operation, as their FULLY VAXXED employees are being Covid infected en masse [pna.gov.ph, 2022-Jan-11], they who eat full decent meals on time and dwell in well-sanitized environments. 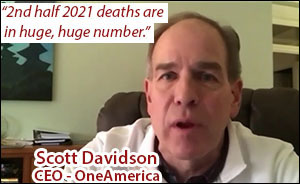 Scott Davison, the CEO of OneAmerica, a $100 billion insurance company based in Indianapolis since 1877, said the death rate is up a stunning 40% from pre-pandemic levels among working-age people. He said the increase in deaths represents “huge, huge numbers,” and that’s it’s not elderly people who are dying, but “primarily working-age people 18 to 64” who are the employees of companies that have group life insurance plans through OneAmerica. Davison was one of several business leaders who spoke during the virtual news conference on 2021-Dec-30 that was organized by the Indiana Chamber of Commerce. Most of the claims for deaths being filed are not classified as COVID-19 deaths, he said.

Some transcript of Davidson’s speech from this 1-minute video [Youtube, 2022-Jan-3].:

“We are seeing, right now, the highest death rates we have seen in the history of this business – not just at OneAmerica, the data is consistent across every player in that business;
. . . the increase in deaths represents huge, huge numbers, and that’s it’s not elderly people who are dying, but primarily working-age people 18 to 64 who are the employees of companies that have group life insurance plans through OneAmerica;
. . . what we saw just in third quarter, we’re seeing it continue into fourth quarter, is that death rates are up 40% over what they were pre-pandemic. Just to give you an idea of how bad that is, a three-sigma or a one-in-200-year catastrophe would be 10% increase over pre-pandemic, so 40% is just unheard of;
. . . What the data is showing to us is that the deaths that are being reported as COVID deaths greatly understate the actual death losses among working-age people from the pandemic. It may not all be COVID on their death certificate, but deaths are up just huge, huge numbers;
. . . the company is seeing an “uptick” in disability claims, at first it was short-term disability claims, and now the increase is in long-term disability claims.” 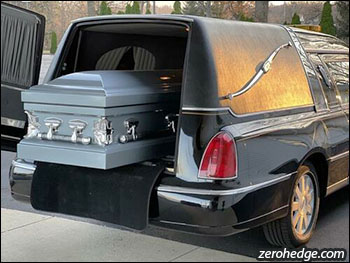 Ex-Blackrock fund manager Ed Dowd has spent the last month (2022-January) analyzing “breadcrumbs” associated with a rise in excess mortality vs. pre-pandemic levels [zerohedge.com, 2022-Feb-5]. The picture rolling out of the insurance and funeral services industries is disturbing. On Tuesday (2022-Feb-1), financial insurance company UNUM reported that their Life segment saw an increase of 9% in their ratio of payouts vs. premiums (Benefit ratio), a 17.4% increase in 2021 vs. 2020 despite widespread vaccinations, and a 13.3% increase over 2019. In 2019 the unit had $266 million profit, last year a profit of $82 million and this year a loss of -$192 million – a swing of $458 million lower over 2 years. Important to remember these are employed working age people. Also, Dowd noted that funeral home company CARRIAGE SERVICES saw a 28% increase in 2021-September vs. 2020, and a 13% increase in August vs. the same period. Funerals and cremations are up 12% and 13% respectively on the quarter.

Dowd also noted that Lincoln National’s death claims are up 13.7% y/y, and up 57% in Q4 vs. 2019. CFO Randy Frietag explained on Thursday that in 2021, the share of young people dying from Covid doubled in the second half of the year. . . Reinsurance Group of America reported a profit in Q4 2020 when the most of the population was unvaccinated and amid a deadlier strain of Covid-19, yet they registered a loss in Q4 2021 with more than 60% of the country fully vaccinated. . . Also noting a spike in younger deaths which peaked in Q3 2022, is Hardford Insurance Group, which reported that mortality is up 32% from 2019 pre-covid levels, and 20% from 2020 pre-vaccine levels – because fewer older people are dying (they have already died), but younger people are dying more.

as the COVID Narrative collapses, it’s the VACCINE’s Killing Spree

THIS CARNAGE CANNOT BE HIDDEN ANYMORE!. IT MUST STOP NOW!!!

So it happened, a request was made to investigate the death of a person post-vaccination. It’s prosecutor Carlos Insaurralde, after receiving the complaint, made corresponding requests for reports, put pressure and, in the end, the A.N.M.A.T. — [government agency: National Administration of Medicines, Food and Medical Devices] — ended up answering the court that the inoculum they are applying to the entire population contains GRAPHENE (the document below). . – [orwell.city, 2022-Jan-17]. 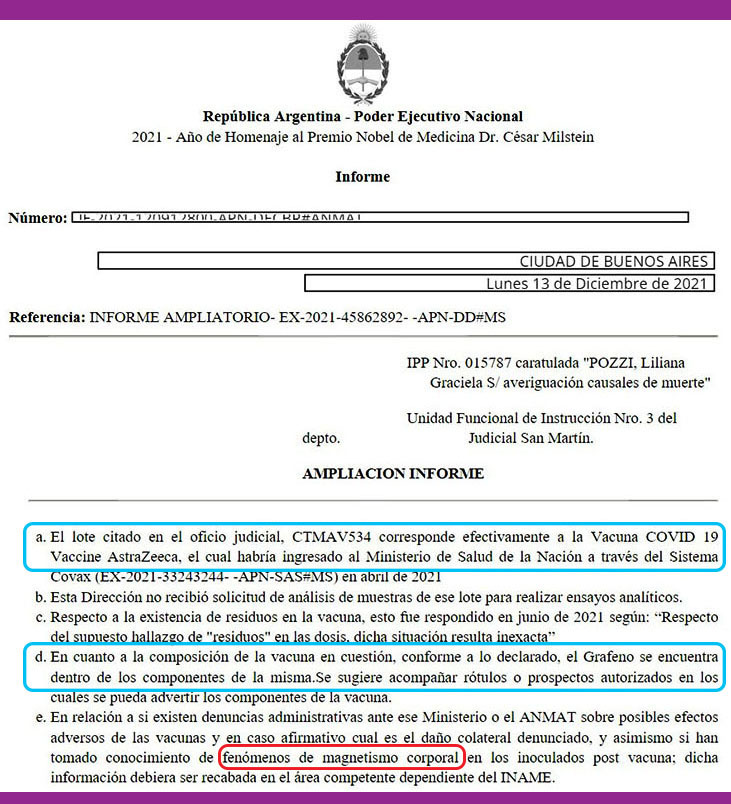