UNDERSTAND the times we’re in TODAY

The Masters of the World

The world is now under control by the evil forces. They are the ruling Elite, the Globalists, the richest and most powerful people of the world. They are not men of God, so they will never do the WILL of GOD.

And they are boldly explicit of their evil aims that they erected their own version of the Ark of Covenant in Elberton, Georgia (100 miles east of Ted Turner’s CNN Headquarters in Atlanta) with their own version of “Ten Commandments” which eloquently formulates their own vision of what this world should be: the New World Order. They consider the current seven billion world’s population as anathema, that first and foremost, they aim to maintain the world population at just 500 million, thus culling down six billion people or so.

In anticipation of massive deaths in the near future (their lord, Satan, is in a hurry as he knows his time is short), obviously they are indeed getting ready. 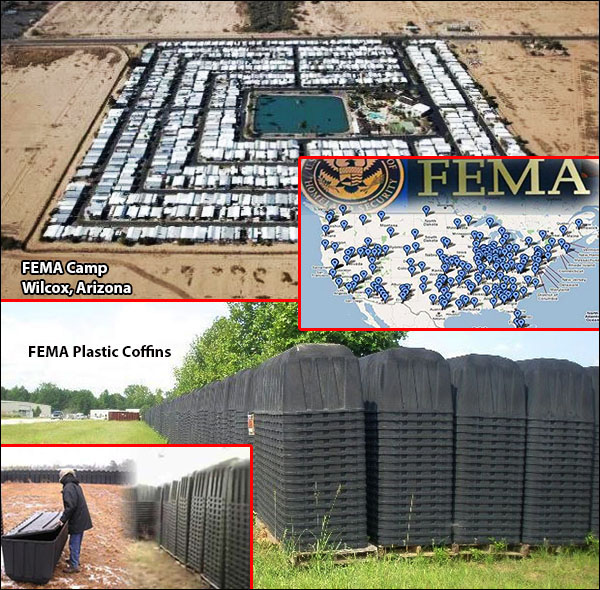 They are bent on accomplishing this at all cost. In two years time or so, they expect people to drop dead like flies. We can already see some of their evil schemes to achieve this.

• COVID VACCINE – sooner or later but surely, the vaccine’s spike protein will cause the ‘intended’ blood-clot, and once this injury sets in the patient’s condition will deteriorate continiously, until his death.

• FAMINE and Supply-chain – they control the shipping and/or transport of commodities, including food; . soon, this will collapse, and yes deliberately, to cause massive shortages, particularly in ENERGY (petroleum products) and FOOD. – [ABC NEWS, 2021-Oct-14]

“they stopped animal-testing because the animals kept dying”

On 2021-May-6, the Texas Senate Committee on State Affairs took testimony from Texas physicians regarding mandatory vaccination and Vaccine Passports in Texas – (the Senate Bill SB 1669: Stop Forced Vaccination and Vaccine Passports in Texas). It was revealed in the hearing that “COVID-19 vaccine trials in animals were stopped because they kept dying.”  In this VIDEO: tlcsenate.granicus.com. And this TRANSCRIPT at segment [44:20]:

Senator BOB HALL: “Did you see any other vaccine that was put out for the public that skipped the animal tests?”

Sen. HALL: “And as what I’ve read, they actually started the animal tests and because the animals were dying, they stopped the tests.”

The VACCINE is for MASSIVE-SCALE DEPOPULATION agenda – . . . and this authoritative intuition from Dr. MIKE YEADON, former PFIZER Vice President and Chief Scientist:

“the authorities are bent on administering ‘vaccines’ to as many of the population as they can, intending to also include minor children and eventually babies – this is madness. It’s my considered view that it is entirely possible that this will be used for massive-scale depopulation. If someone wished to harm or kill a significant proportion of the world’s population, the systems being put in place right now will enable it.; . . those in good health and younger than 60, they don’t perish from the virus; so. it’s wholly unethical to administer something novel (mRNA vaccine) and for which the potential for unwanted effects after a few months is completely uncharacterized. . the design of these ‘vaccines’ results, in the expression of the spike protein, which has adverse biological effects of its own and are harmful, initiating blood coagulation and activating the immune ‘complement system’.” – – Dr. Mike Yeadon.

Taiwan’s health authorities say that as of Monday (NTD News, 2021-Oct-14) deaths after Covid vaccination reached 865, while deaths from the Covid virus itself are less at 845. 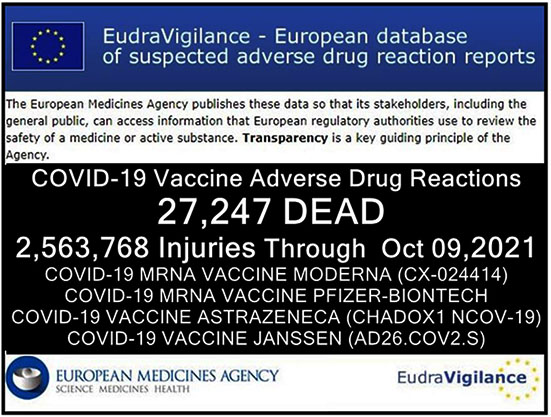 In Europe, vaccine deaths possibly may have already surpassed their outrageously MANIPULATED Covid death figures. – [EudraVigilance is only for countries in Europe who are part of the European Union (EU), which comprises 27 countries; the whole Europe is 50 countries.]. Just like in America, they are incredibly inflating their Covid deaths, indeed to hype the FEAR, as expounded by Minnessota Senator Dr. Scott Jensen on FOXNEWS [2020-April-9]. He said, “a patient who died after being hit by a bus and tested positive for Covid would be listed as having died from Covid regardless, . . . I would remind Dr. Anthony Fauci that anytime health care intersects with dollars it gets awkward.”

“Do not be seduced and dominated by lies. ‘ A dangerous disease is determined by the dead, not the infected, so ‘WHERE ARE ALL THE DEAD?’ . . Do not equate infection with sick people, and start distinguishing between whether the person died OF Sars-Cov2 or WITH Sars-Cov2. . this “pandemic” as we doctors say, only exists as a laboratory pandemic, it means it is diagnosed in the lab without it being known whether the person is or will be SICK.. . This new mRNA vaccination has NOT been adequately tested. There are no long-term data, let alone long-term studies. .” – – Dr. Yves Oberndörfer, specialist in Urology and Andrology.

Covid-19’s survival rate is more than 99% (but the Covid vaccine is eventually/practically zero) – it’s no worse than the common flu. Obviously, Covid is HARDLY a pandemic. But it caused us the catastrophic LOCKDOWN that devastated millions of lives and businesses. . WHO SAY WE CAN STILL RECOVER AND BE BACK THE WAY IT WAS IN 2018? . . They guaranteed that the vaccine will prevent serious complications and death. How could that be when the efficacy of that vaccine wanes continiously at the start and is practically lost after only six months? . . And now reports coming out of ISRAEL and AUSTRALIA claim hospitals are being filled with vaccinated people, 90% of whom are suffering serious illness though being fully vaccinated.

Just about a year ago, the word “booster shot” does not exist. In Israel where 90% were already fully vaccinated (two doses), after administering the 3rd jab or “booster shot” to three million of Israelis (they are said to be the first ‘experimental human lab rats’), they are now preparing for the 4th jab or second booster shot. . Clearly there is no end in sight, it’s booster shot ad infinitum. With each booster shot is additional dose of deadly blood-clotting chemical, so more and more are added until all those vaccinated are caught by the blood-clot, then all of them are dead. . Then it will be a blissful “HALLELUJAH!” for all those ILLUMINATI cabal of George Soros, Ted Turner, David Rockefeller, Anthony Fauci, etc . . .

U.S. airline workers decried mandatory vaccine being imposed on them. They deplore the stifling of DEBATE and the draconian CENSURE of information on the issue. They lament that their inherent facility for ‘CRITICAL THINKING’ is brazenly discredited.