[Please give notice to the Timeline.]

For centuries, the Catholic Church has consecrated the first Saturday of each month to Our Lady with the intention of making reparation for man’s blasphemies and outrages against Her. It had already been an established custom among the devout, but over the years as most of the devout die, and their number dwindle, the practice also waned, until obviously almost forgotten. So in 1905-June-12, Pope Saint PIUS X :[1835-1914]: issued a decree in which he praised this practice and offered generous indulgences for it so that it be restored and flourish again.

In 1917-July-13, the third Apparition of Our Lady in Fatima, Sister Lucia was told that there would be a future manifestation concerning the practice of the Five First Saturdays Devotion or FFSD: “I shall come to ask, that on the First Saturday of every month, Communions of reparation be made in atonement for the sins of the world.” And also in this Apparition, Our Lady told the children that World War I would end but if people do not cease offending God, a worse one will break out during the pontificate of Pius XI.

Our Lady told the children: “When you see a night illuminated by an unknown light, know that it is the great sign that God gives you that He is going to punish the world for its crimes by means of war, of hunger, and of persecution of the Church and of the Holy Father.
… To prevent this, I shall come to the world to ask that
Russia be consecrated to my Immaculate Heart, and I shall ask that on the First Saturday of every month Communions of reparation be made in atonement for the sins of the world. If my wishes are fulfilled, Russia will be converted and there will be peace; if not, then Russia will spread her errors throughout the world, bringing new wars and persecution of the Church; the good will be martyred and the Holy Father will have much to suffer; certain nations will be annihilated. But in the end my Immaculate Heart will triumph. The Holy Father will consecrate Russia to me, and she will be converted, and the world will enjoy a period of peace.”

In 1925-Dec-10 in Pentevedra, Spain, where Sr. Lucia was sent to the Dorothean Sisters to learn how to read and write, Our Lady with the Infant Jesus appeared again to Lucia. Jesus spoke first: “Have compassion on the Heart of your Most Holy Mother, covered with thorns which ungrateful men place therein at every moment, while there is no one who does an act of reparation to remove them for her.” 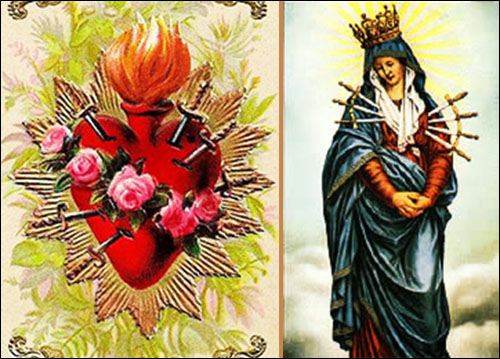 Then Our Lady followed: “Behold, my daughter, my Heart encircled with thorns, with which ungrateful men pierce It at every moment by their blasphemies and ingratitude. Give me consolation, you, at least; and make known on my behalf that I promise to assist at the hour of death, with the graces necessary for salvation, all who on the First Saturday of five consecutive months confess their sins, receive Holy Communion, recite five decades of the Rosary, and keep me company for fifteen minutes meditating on the mysteries of the Rosary, with the purpose of making reparation to my Immaculate Heart.”

And so time went by, and years passed. Obviously the Church didn’t give attention to FFSD – it silently dissolved in thin air.

Fast-forward to 1938-January-25, that night was illuminated by the “unknown light”, the prophecy of 1917 came to fruition – World War II was brewing.

1939-Feb-10:- Pope Pius XI was murdered by the Freemasons, to eventually put in place PIUS XII, Eugenio Pacelli, the Hitler’s pope. The Freemasons dressed as Bishops and Cardinals of the Church gained foothold in the Vatican.

In 1939-March-19, Sr. Lucia communicated: “Whether the world has war or peace depends on the practice of this devotion, [i.e., FFSD] along with the consecration of Russia to the Immaculate Heart of Mary. This is why I desire its propagation so ardently, especially because this is also the will of our dear Mother in Heaven.”

In 1939-September-1, Germany invaded Poland, the formal start of WWII. The rest was history.

FYI:- The 1917 prophecy that “Russia will spread its errors:-“ – the Eastern European countries became under the domination of Russia after WWII, and in the 1950s Russia began its massive campaign of injecting Communist insurgency to Latin American countries and Asia, that included the Philippines. Russian communists agents spread around the world evangelizing Marxist Manifestos.

FYI:- The 1917 prophecy that “the Holy Father will have much to suffer”:- – the Freemasons murdered Pope Pius XI, then one by one in succession Pope John XXIII, Paul VI, and John Paul I, and they also almost succeeded in killing Pope John Paul II in 1981. . . . [More on this later.]

How to Precisely fulfill the Five First Saturdays Devotion: [this came from First Five Saturdays Devotion – [themostholyrosary.com].] The elements of this devotion, therefore, consist in the following four points, all of which must be offered in reparation to the Immaculate Heart of Mary. One should make this intention before carrying out Our Lady’s requests. A renewal of the actual intention at the time is best; however, if such an intention is made now, it will fulfill the requirements if, for instance, the actual intention is forgotten at the time of confession.

To those who faithfully follow Our Lady’s requests for the Five First Saturdays, she has made a wonderful promise which she, as Mediatrix of All Graces, will certainly fulfill: “I promise to assist at the hour of death with the graces necessary for salvation.” This means that our Blessed Mother will be present at the hour of death with the actual grace of final perseverance, (which after the gift/grace of Faith), is the most important grace.

After completing the Five First Saturdays, one may continue the devotion simply to console the Immaculate Heart of Our Lady. A tender love of our Blessed Mother will lead one to do all he can to make reparation for the sins which pierce her Immaculate Heart. Let us remember, too, that although Our Lady made this promise to those who would observe five such First Saturdays in succession, in her July apparition she asked simply that Communions of reparation be made on every First Saturday to atone for the sins of the world.