THERE’S NO PANDEMIC!!! Covid-19 is no worse than the common flu. Lockdown is a stupid thing, there is no science in there. The ACU (Außerparlamentarischer Corona Untersuchungsausschuss), an association of German doctors and scientists, lament the social media platforms Facebook, Google, and others, and the mainstream mockingbird fake news media for censuring this information. Dr. Heiko Schöning, the leader of ACU declared: “We have a lot of evidence that Covid-19 is a fake story all over the world, that it’s no more dangerous than the seasonal flu and that there’s no justification for the measures being taken to combat it.”

Dr. Michael Levitt, :[American-British-Israeli chemist who was awarded the 2013 Nobel Prize for Chemistry for developing accurate computer models of chemical reactions that were able to use features of both classical physics and quantum mechanics.]: a Biophysicist and a professor of structural biology at Stanford University remarked that, with regards to lockdown measures, “the level of STUPIDITY going on here is amazing.” He criticized the WHO (World Health Organization) as well as the social media platforms for censoring different information and informed perspectives regarding the Coronavirus.

“..up to 90% of people testing positive with a standard Covid-19 test, the PCR, carried barely any virus, because the test is too sensitive, and is thus diagnosing huge numbers of people who may be carrying relatively insignificant amounts of the virus and are not likely to be contagious.” – New York Times on Covid-19 Test, 2020-Sept-3 [infowars.com]

People are now waking up and rising. They know Covid-19 is a hoax.

LOCKDOWNS accomplished nothing, just misery and death. A recent British government report estimates that in just a single year lockdowns may cause 200,000 deaths from depriving people of medical care for ailments other than COVID-19 alone (like cancer operations).

“.. nobody has yet demonstrated a single death from the actual virus, from the proper, established, accepted methodology, that a virus has caused his death. It’s all based upon PCR testing,… then we’ve got false positives coming from testing, we know it,… you cannot use this testing (PCR) for diagnostic purposes, and when that’s not enough they’re causing doctors and nurses to change the death certificates to say COVID-19 as the first cause of death.” – Dr. Rashid Buttar exposes FAKE Pandemic Numbers, 2020-April-20 [shiftfrequency.com]

While mainland Europe cowers and in panic, all the while Sweden is in picnic. Sweden didn’t do the lockdown, so no businesses closed, no jobs losses, no anxiety and depression, everybody is happy. 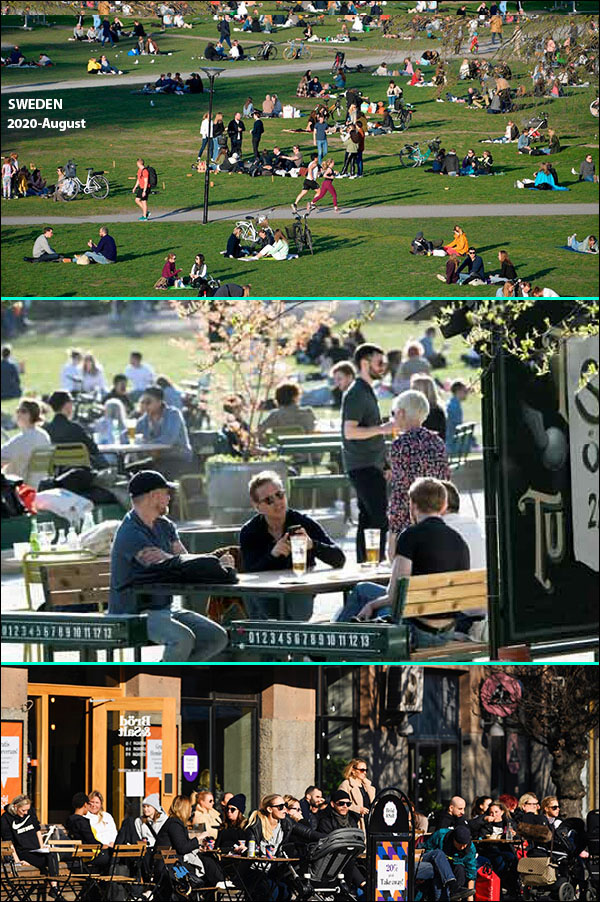 The head of the Norwegian Institute of Public Health, Camille Stoltenberg, believes Norway could have brought the coronavirus pandemic under control without a lockdown, and called for the country to avoid such far-reaching measures if hit by a second wave.

So, what’s my take on this? I’m not a doctor, but anyway here’s my one-peso analysis. Using the viruses in their arsenal – the HIV, SARS-Cov, and MERS-Cov – the Vatican/Illuminati endeavored to produce a powerful bioweapon (for their New World Order depopulation agenda) by mixing or combining the genetic materials of these viruses. :[Mga kapatid, the one actually running the show here is no other than the Jesuit Black Pope, Fr. Arturo Sosa Abascal of Venezuela. Dr. Fauci and WHO Director-General Dr Tedros Ghebreyesus are just operatives.]: Unfortunately, there was a moratorium in the US preventing such pursuit, so in 2015 they outsourced it to China, a neophyte in that field of bio-engineering. So after four years, in 2019-December, yes the Chinese were able to produce a different virus, but it’s no better, or worse, than the common flu. The Illuminati expected a powerful virus, instead they got a ‘lemon virus’. But since they are in a hurry, they unleashed it anyway. The virus is no more dangerous than the common flu, but WHY? . . becoz it’s made from China.

MADE IN CHINA: Military Amphibious Armored Tank – The newly made Chinese amphibious tank touted as the tank that will conquer the world, used in military exercise. After cruising the river for 30 seconds, it sank straight down like a rock, see how those brave officers frenzied as they abandoned the tank and swam for their lives, hehehe. . ..

After Covid-19, will they now unleash Covid-20? There is no more Covid-20, but the next bedlam is the world economic meltdown. This is the general reset of the major aspects of our lives, especially our finances, on what and how we buy and sell. This is the enslavement of humanity.

Mga kapatid, we are in the last days. Always pray the Holy Rosary. Repent for your sins, and also make reparations for your sins by doing acts of charity like alms-giving.

“Charity covers a multitude of sins. Offer hospitality to one another without grumbling. Each of you should use whatever gift you have received to serve others, as faithful stewards of God’s grace in its various forms.” – 1 Peter 4:8.