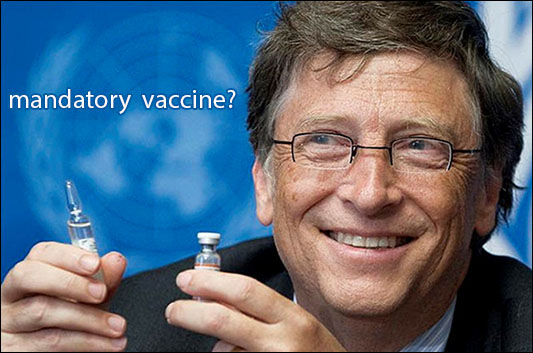 “Eventually we will have some digital certificates to show who has recovered or been tested recently, or when we have a vaccine who has received it.” – Bill Gates.

Mga kapatid, stay focused. The “digital certificate” is the New World Order. The ruling elite are proceeding along vigorously to their endgame: world domination where we become slaves and they as our masters. Remember, they have written it in stone.

And these Illuminati operatives, you must know their moves.

“In the event that I am reincarnated, I would like to return as a deadly virus, in order to contribute something to solve overpopulation.“ – Prince Phillip, husband of Queen Elizabeth II.

“A total world population of 250-300 million people, a 95% decline from present levels, would be ideal.“ – Ted Turner, CNN Founder.

“get it straight from the horse’s mouth”

This 26-minute video, “The PLANDEMIC Indoctornation – Part I”, was made available in YouTube and Facebook around 2020-May-8. It was then immediately taken down citing community guidelines. Since then, it was re-uploaded (by netizens) and then removed, uploaded and removed, and so on. It now exists in many social media platforms under different names, labels, and categories to elude censorship. And it now has its own home at: Digital Freedom Platform by London Real.

“the cure is worse than the disease”

Dr. Judy Mikovits, PhD is a molecular biologist with expertise in virology. In the 1980s, she worked with Dr. Anthony Fauci on HIV-AIDS research, and for her that was not a pleasant experience. In 1991, her doctoral thesis revolutionized the treatment of HIV-AIDS. And at the height of her career, she published a blockbuster article in the Journal of Science, where she showed that the common use of animal and human fetal tissues were unleashing devastating chronic diseases. For exposing this deadly secret, the minions of Big Pharma waged war on her, destroying her good name, career, and personal life. She was arrested, and put in gag order for five years.

After her gag order has been lifted, she wrote a book, Plague Of Corruption (just released on 2020-April), exposing the corruption in the Big Pharma and the health industry, in the (U.S.) government health agencies, and including the World Health Organization.

In this video, “The PLANDEMIC Indoctornation – Part I”, Dr. Mikovits and other doctors clarified and expressed some opposition to most of the measures implemented to counter Covid-19, particularly the wearing of mask, washing of hands, and the lockdowns.

Mga kapatid, you are the judge.