MGA KAPATID,
The time of PURIFICATION has arrived. Great are the sins of humanity, they have piled up to the roof. “THE CUP IS NOW OVERFLOWING!”. As the rain drops on everyone, good and bad, so will the CHASTISEMENT for our collective sins. So pause for a moment and reflect on the life that you had, and contemplate on the many sins you have done. . . MGA KAPATID, IT’S THE ENDTIMES . . . REPENT, REPENT, REPENT!!!

We must accept and walk-through this PURIFICATION with total humility and faith in the FATHER ALMIGHTY. Soon, we will be oppressed and persecuted by the minions of satan on earth – the ruling elite, the globalists, the Communists and Freemasons. And also by NATURE, which we are already experiencing awfully. The approaching star system NIBIRU, our SUN’s twin star, is nearing planet earth. Its strong magnetic field is causing the many volcanic eruptions, earthquakes, floods, and the blizzards and snow storms in Europe and North America, that incredibly reaches even the Sahara desert of Africa… . . MGA KAPATID, IT’S THE ENDTIMES . . . REPENT, REPENT, REPENT!!! 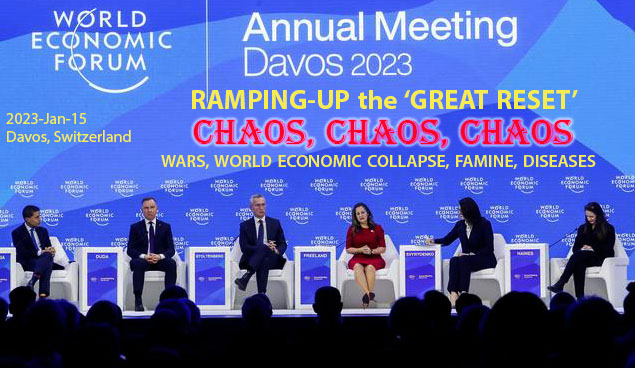 The annual World Economic Forum (WEF), the gathering of the world’s top ATHEISTS, has just been concluded. This cabal of satanists – the Communists and Freemasons, the Rostchilds and Rockefellers, the Illuminati and the Bilderberg Group, etc… – they are the foremost oppressors of mankind, the tyrannical rulers of the world, who aim to turn all of us into slaves, have finalized their game-plan: WARS, ECONOMIC COLLAPSE, SOCIAL TURMOIL, FAMINES, DISEASES.

So it is written – humanity will be destroyed physically, emotionally, financially, as well as morally and spiritually. This is operation ORDO AB CHAO – order out of chaos. Humanity will be driven to desperation and hopelessness that to have a piece of bread, they will have to accede to the MARK OF THE BEAST.

Very soon, COMMUNISM will conquer the world, including the CATHOLIC CHURCH and all the other religions. It is completely a totalitarian regime, where “surveillance is not just above the skin, but also deep under the skin.” (2001-July, Dr. Yuval Noah Harari – lead advisor to the WEF). Yes they will know in REAL TIME not just your exact location on earth, but also they will know that you took a Viagra at 10p.m., and had orgasm at 11p.m.

RUSSIA is not defeated, but is as strong as ever. These presstitutes of the mainstream media who keep heralding Ukranian victories in every battle, they are lying to their teeth. Ukraine is beyond rescue. . . Very soon, Russian missiles will streak the European skies, and across the Atlantic. Like the way the Apostles fled when Jesus Christ was arrested, all these NATO countries will scamper in all directions. They will leave the USA alone and badly humiliated. . . IT’S THE NUCLEAR WAR!

The SMOKE OF SATAN in the Vatican

Dr. Bella Dodd:- in 1950 at Fordham University, speaking as a former high ranking official of the American Communist Party she stated:

“In the 1930’s we put 1,100 men into the priesthood in order to destroy the Roman Catholic Church from within. The idea was for these men to be ORDAINED and progress to positions of influence and authority as Monsignors and Bishops. Right now they, the COMMUNIST infiltrators, are in the highest places in the Church” where they are working to bring about CHANGE in order to weaken the Church’s effectiveness against Communism. These CHANGES would be so drastic that ‘you will not recognize the Catholic Church.’”

“Of all the world’s religions, the Catholic Church was the only one feared by the Communists, for it was its only effective opponent. The whole idea was to destroy, not the institution of the Church, but rather the Faith of the people, and even use the institution of the Church, if possible, to destroy the Faith through the promotion of a PSEUDO-RELIGION – something that resembled Catholicism but was not the real thing.”

In 1962, a dozen years after that speech, the Synod Vatican 2 was convened. No wondeer the presence of COMMUNISTS, Freemasons, Modernists, and Heretics attending this anti-Catholic convention was very visible. Many of these satanic priests, Bishops, and Cardinals like FR. KARL RAHNER, SJ at Synod Vatican 2 were so virulent anti-Catholic and extremely hostile to almost everything that is really part of the authentic “Catholic Tradition”, e.g. the Catholic Tradition Liturgical Rites for the Mass and the Seven Sacraments. Consequently, a number of these “Catholic Traditions” were changed.

“‘Fallen! Fallen is BABYLON the Great!’
She has become a dwelling for demons
and a haunt for every impure spirit.”

Fast-forward to today, it’s DEJA VU!. This satanic Pope Francis has openly declared that “I am a Communist, and JESUS CHRIST is also a Communist.” . And he comes announcing many good news:. that ATHEISTS who do good things are also welcome in Heaven, even if they come cursing the Father Almighty;. that couples in SAME-SEX MARRIAGE are also children of God, that jesus Christ also died for them and thus they deserve blessings:. and that CONTRACEPTION and ABORTION are okey to counter the ZIKA VIRUS menace among babies .. . . And he is bestowing honors to abortionists, heralding them for their genuine service to the community… . . MGA KAPATID, IT’S THE ENDTIMES . . . REPENT, REPENT, REPENT!!!