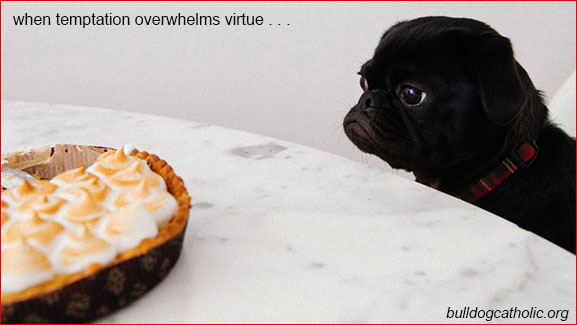 “No one can enter the Kingdom of Heaven untempted. Remove the temptations, and no one would be saved. Expect temptation until the last breath.” – St. Anthony of the Desert, 251-373 AD, Egypt.

“Consider it pure joy, that whenever you face temptation of many kinds, because you know that the testing of your faith produces perseverance – let perseverance finish its work so that you may be mature and complete, not lacking anything.” – James 1:2.

“The palm of glory is reserved for those who persevere till the end. God will help us and crown us with eternal triumph.” – Padre Pio, 1887-1968, Italy.

God speaks through the Saints. He puts words into their mouths, that’s why though most of them were sparingly educated, like Saint Faustina who only had four years of education and worked as housemaid, they were surprisingly articulate in spiritual matters. The Saints explain things in very few words yet very intelligible and powerful. -[contrast this to El Shaddai Brother Mike Velarde – its Satan putting words into his mouth when he cheers and dances ‘siksik,liglig, kilig’, to bow three times and seven times, and to clap three times and seven times. Padre Pio said, “dancing is an invitation to Satan.” ]-. On this subject of temptations as related to virtues, as usual I was groping for words initially, so I deemed it best to just quote the authorities: the SAINTS.

“You cannot arrive at virtue except through knowing yourself and knowing Me. And this knowledge is more perfectly gained in time of temptation, because then you know that your are nothing, since you have no power to relieve yourself of the sufferings and troubles you would like to escape….for the devil is weak and can do nothing of himself, but only as I permit him. And I give him leave not through hatred but through love, not so that you may be conquered but that you may conquer and come to perfect knowledge of yourself and of Me, and to prove your virtue – for virtue can only be tested by its opposite.” – St. Catherine of Sienna, 1347-80, Italy.

Temptation is the test of virtue, i.e., the best way to prove virtue is thru temptation. Those whom God calls to special heights of sanctity, the Saints, are those who He subjected to the most numerous and intense temptations, that caused them immense suffering, but then engendered their virtues to remarkable heights. They have conquered temptation. They have proved their virtues and have persevered.

“Temptations are like soap, which, when spread over the clothes, seems to stain them, but in reality, purifies them.” – St. Francis de Sales.

“However long the temptation may persist, it cannot harm us so long as it is unwelcome to us.” – St. Francis de Sales.

“If you want to avenge yourself on the devil and free yourselves more quickly from temptation, ask the [Mother] superior, as soon as a temptation comes to you, to give you some lowly office to do such as the tasks you dislike, and do such thing as best you can, on your own initiative. The Lord will show you ways of doing so, and this will soon rid of the temptation.” – St. Teresa of Avila, her adrise to her fellow Sisters.

“It is through temptation that God binds His chosen souls to Himself.” – Padre Pio.

“Remember that he who flees from temptation, wins!” – Padre Pio.

“Do not let temptations frighten you; they are the trials of the soul whom God wants to test when He knows that he is strong enough to sustain the battle and weave his garland of glory with his own hands.” – Padre Pio.

“Blessed is the one who perseveres under trial because, having stood the test, that person will receive the crown of life that the Lord has promised to those who love him.” – James 1:12.

“Trials will show that your faith is genuine. It is being tested as fire tests and purifies gold – though your faith is far more precious than mere gold. So when your faith remains strong through many trials, it will bring you much praise and glory and honor on the day when Jesus Christ is revealed to the whole world.” – 1 Peter 1:7.