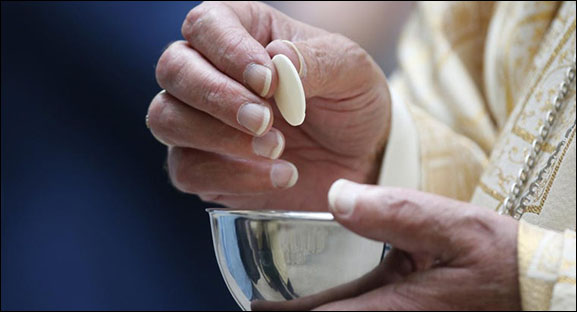 The Eucharist should remind us of the sacrifice and suffering of Jesus for our sake. It is the reenactment of Christ’s Last Supper with his apostles, and basically, it is the celebration of our union with Jesus, and our intimate fellowship with our brothers and sisters in faith. Spiritually, it is the actual communion of the Father, Son, and Holy Spirit where our becoming the sons and daughters of the Father is strengthened. As we partake of the Bread, we who are many are made as one Body.

In the celebration of the Eucharist :[in Greek, Eucharist means “thanksgiving”], bread and wine become the Body and Blood of Jesus Christ through the power of the Holy Spirit and the instrumentality of the priest, or of a true servant of God. It is not just symbolically, but it’s real, as attested by over a hundred documented accounts of Eucharistic miracles through the ages since the death of Jesus where the “consecrated host” or the unleavened bread has become literally flesh and blood. One such miracle was actually witnessed by the present pontiff, Pope Francis, when he was still a Bishop Bergoglio in Buenos Aires in 1996. That miracle where the host turned real flesh and blood, as confirmed by scientists with credentials, happened right under his nose – and his ‘not proclaiming it or attesting to it’ is as good as denying it. Indeed, Bergoglio does not believe in the Eucharist up to now.

Without the Eucharist, how else can we remember Jesus? . . as passionately?

“The Lord Jesus took the bread, gave thanks, broke it and said, ‘This is my body, which is for you; do this in remembrance of me.‘ And after supper he took the cup, saying, ‘This cup is the new covenant in my blood; do this, whenever you drink it, in remembrance of me.’ For whenever you eat this bread and drink this cup, you proclaim the Lord’s death until he comes.” -1 Corinthians 11:24.

But this sacrament MUST NOT be taken for granted. Obviously, many are doing it tepidly or listlessly.

“So then, whoever eats the bread or drinks the cup of the Lord in an unworthy manner will be guilty of sinning against the body and blood of the Lord. Everyone ought to examine themselves before they eat of the bread and drink from the cup. For those who eat and drink without discerning the body of Christ eat and drink judgment on themselves. That is why many among you are spiritually weak and sick, and a number of you have fallen asleep. But if we were more discerning with regard to ourselves, we would not come under such judgment.” – 1 Corinthians 11:27.

It is necessary that before receiving this holy sacrament, one must have cleansed himself, i.e., must have confessed and ‘remorsed’ for his sins. Why? Because Jesus is immaculately clean, so the one to receive him must also be clean, else the intention of the sacrament is not realized. Surely we can never be as clean as Jesus, but for this communion with Jesus to have accord and harmony, we should at least strive to be clean.

The Eucharist is VERY VERY important.

How Jesus wished his disciples to have the memory of an elephant. Three days after He was buried, Mary Magdalene and other disciples went to his tomb to look. When they found it empty, they were dumbfounded and bewildered. Then suddenly, two angels appeared and spoke: “Why do you look for the living among the dead? He is not here; he has risen! Remember how he told you, while he was still with you in Galilee: ‘The Son of Man must be delivered over to the hands of sinners, be crucified and on the third day be raised again.’” – Luke 24:5. Then they remembered his words.

And to really stress, and instill, the importance of the Eucharist, Jesus, after he has risen from the dead, further appeared before his two disciples in the village of Emmaus. Without realizing that it was Jesus himself who was with them, the two disciples went on conversing with him. Jesus said: “How foolish you are, and how slow to believe all that the prophets have spoken! Did not the Messiah have to suffer these things and then enter his glory?” And beginning with Moses and all the Prophets, he explained to them what was said in all the Scriptures concerning himself.” – Luke 24:25. That was a thorough and comprehensive two-hour Bible study of the Old Testament.

Then, to inculcate to his disciples the importance of the Eucharist, he did it again, a beautiful replay.

“When he was at the table with them, he took bread, gave thanks, broke it and began to give it to them. Then their eyes were opened and they recognized him, and he disappeared from their sight.” – Luke 24:30.

Then the two got up and returned to Jerusalem, to the other disciples to tell them the story. And they went on proclaiming to the village the truth of Jesus Christ. . . This is in exact contrast to what Pope Francis did after he witnessed the Eucharist miracle in Buenos Aires in 1996 – he kept it to himself as if nothing has happened, and he is still tight-lip about it up to now.