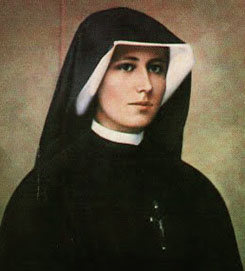 She was born as Helena Kowalska on 1905-Aug-25 in Głogowiec, Poland, the third of ten children of poor but religious peasant family, with her father working as a carpenter. She stated that she first felt a calling to the religious life at seven years old. At 16, she went to work as a housekeeper to support herself and to help her parents. — Saint Faustina, [wikipedia]

In 1924, at 19 years old, she had a vision of a suffering Jesus who instructed her to depart for Warsaw immediately and to join a convent. Without permission from her family, without knowing anyone in Warzaw, and without anything but just the clothes she was wearing, she then boarded a train to Warzaw. When she arrived, she entered the first church she saw, Saint James Church in Warsaw, and attended Mass. She asked the priest, Father Dąbrowski, for suggestions, and he recommended her to stay with a local woman, Mrs. Lipszycowa, whom he considered trustworthy, until she found a convent. She approached several convents, but was turned down every time, in one case being told that “we do not accept maids here”, referring to her poverty –[but Faustina could read and write though she had just four years of education ] . 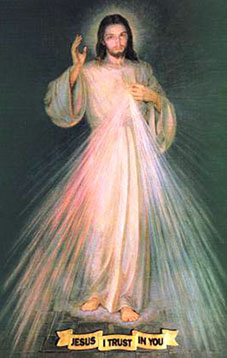 After several weeks of searching, the mother superior of a convent, Congregation of the Sisters of Our Lady of Mercy, decided to give Faustina a chance and conditionally accepted her, provided that she could pay for her religious habit. So she again worked as a housemaid to save money, making deposits at the Convent throughout the year, and finally gained acceptance. On 1926-April-30, at twenty years old, she received her habit and took the religious name Sister Maria Faustina of the Blessed Sacrament.

In 1931-Feb-22, Jesus appeared to Faustina and instructed her to draw His image as the Divine Mercy, with the signature: “Jesus, I trust in You”. It was rendered by Eugene Kazimierowski, an artist and professor at the Vilnius University, in the present-day Lithuania. Today, the Divine Mercy has become the popular “three o’clock habit” devotion that is regularly celebrated and prayed upon by most radio channels.

The Vision Of Hell

All Saints, and indeed all, being co-sufferers and co-redeemers of Jesus, have been shown the vision of hell, but only a few have recorded such because most of them were of little education and can barely read and write. And still very few had “secretaries” to record for them. Even among the Apostles of Jesus, most of them like Peter were illiterate, i.e., no read, no write.

Saint Faustina had her own vision of hell. She was commanded by God to put it in writing to bear witness to its existence. This is her story. — DIARY of Saint Faustina, #741

“I am writing this at the command of God, so that no soul may find an excuse by saying there is no hell, or that nobody has ever been there, and so no one can say what it is like.  I, Sister Faustina, by the order of God, have visited the abysses of hell so that I might tell souls about it and testify to its existence.  I cannot speak about it now; but I have received a command from God to leave it in writing.  The devils were full of hatred for me, but they had to obey me at the command of God. What I have written is but a pale shadow of the things I saw. But I noticed one thing:  that most of the souls there are those who disbelieved that there is a hell.  When I came to, I could hardly recover from the fright. How terribly souls suffer there! Consequently, I pray even more fervently for the conversion of sinners. I incessantly plead God‟s mercy upon them. O my Jesus, I would rather be in agony until the end of the world, amidst the greatest sufferings, than offend You by the least sin.”

“Today, I was led by an Angel to the chasms of hell. It is a place of great torture; how awesomely large and extensive it is! The kinds of tortures I saw:”

“These are the tortures suffered by all the damned together, but that is not the end of the sufferings. There are special tortures destined for particular souls. These are the torments of the senses. Each soul undergoes terrible and indescribable sufferings, related to the manner in which it has sinned. There are caverns and pits of torture where one form of agony differs from another. I would have died at the very sight of these tortures if the omnipotence of God had not supported me. Let the sinner know that he will be tortured throughout all eternity, in those senses which he made use of to sin. “

So she said “there are special tortures for particular souls”, and they “will be tortured for eternity in those senses which they made use of to sin.” Yes, I’ve figured it out, some of these “particular souls” are: