“.. Fallen! Fallen is Babylon the Great!  She has become a dwelling for demons and a place for every impure spirit.” – Revelation 18:2.

“ Rome will lose the Faith and become the seat of the antichrist. . . The Church will be in eclipse.” – Prophecy of Our lady of La Salette, 1846 [France].

The magnificent artworks of the Vatican never fail to amaze the visitors. But then, if only they knew the symbolism that these represent, they’ll be even more dumbfounded, and shocked.

These artworks reveal the true disposition of the Vatican. Clearly it is not Catholic, not even Christian, but pagan. The Vatican worships many gods, and Jesus unfortunately is not one of them. Their seeming worship of Jesus is a huge facade, a great mockery. It is purposely a necessary cosmetic. The whole Vatican has become a mammoth ‘Potemkin village’, indeed the seat of the antichrist. This Masonic cabal of Vatican-Jesuits are masters of deceit.

The acronym IHS in the Jesuits’ logo actually stands for the powerful Egyptian deities or gods: Isis, Horus, and Set or Satan. If you’re not terrified by that, you must be a Jesuit. And these deities are actually demons. Yes, the Jesuits don’t worship Jesus, but these demons. The Jesuit-Vatican are indeed pagans who worship many deities or gods, or demons, or whatever. And it’s not only those from Egypt, but also those from the ancient Sumeria and Babylon as well. They have taken all – hook, line, and sinker.

NOTE:- When the group of angels led by Lucifer rebelled against the Lord Almighty, they were cast out of heaven, as HE created this universe. These fallen angels or more commonly called demons, which was a third of all the angels in heaven, were strewn to all the galaxies of the cosmos. As of 2015, scientists have counted the galaxies to have reached two trillion. Each of these has 100 billion stars, and surely more than 100 billion demons. – – 2017-Jan-16 [phys.org]: A Universe Of Two Trillion Galaxies – University of Nottingham, and Royal Astronomical Society

It was easy for the ancient people to regard these demons as gods as they possess earth-shaking magical powers. Though they were cast out of heaven, nevertheless as “ex-angels” these demons still have their innate power. They came down to earth from the sky, and people were awed by their magical feats, real spectacles that were beyond their wildest imagination. They were revered not just in Sumeria, Babylon, and Egypt, but all throughout planet earth like the Mayans, Incas, and Aztecs. In India, they were called Shiva and Brahma. Though these deities, or ETs, or demons whatever, were regarded as gods, all of them are maleficent, none of them is benevolent. At the end of Times, they’ll be eating humans.

NOTE:- These demons are devoid of the human attributes of soul, conscience, and spirituality, and of love and compassion, of hope and happiness – all these have been erased in them. As such, all of them are not happy, they don’t hope, all are mad, and without mercy. They are always at war with each other, always aiming to destroy each other. And as such, they gave us the atomic bomb and HAARP. Some scientists are saying there are some “species” of ETs that are benevolent to us humans, and are there to improve our lives with better technology. That’s not true. All these ETs are demons, and all demons are evil. They won’t preach that you kneel before God, repent for your sins, and pray the Holy Rosary. They won’t tell you to go on fasting and do alms-giving. 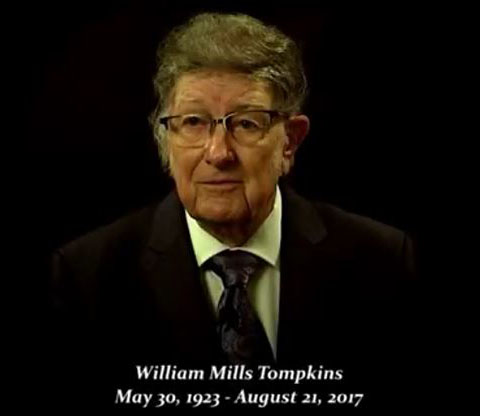 2017-Aug-27 [Howskii]:: William Tompkins: Draco-Reptilians Revealed on the Moon – 2017 Disclosure – YouTube: 9 min. – – Tompkins was among the “who’s who” in the aerospace and aviation industry since World War II, also was a pillar in NASA’s Apollo Lunar Missions: “everything you are told is a lie;. many species of ETs inhabit the moon;. our moon is not a moon, it’s a command center;. Draco-Reptilians control planet earth;. reptilians are raping and killing children;. Bill Clinton, Obama, the Bush family, Queen Elizabeth are reptilians …”

2011-June-20 [JaynLouv]:: The Truth About Aliens – YouTube: 9 min. – – US Army Sgt. Clifford STONE and retired NATO Intelligence Analyst Robert DEAN exposing it all: “the ETs can manipulate time and space;. they are inter-dimensional and multi-dimensional;. they are inter-stellar and inter-galactic;. they are among us walking on the streets, and they look like us…”

NOTE:- – We humans were in heaven before, but because we allowed ourselves to be deceived by the serpent, we have been “exiled” here on earth. In this universe of trillions of galaxies, there is only one species of humans, that’s us, and there’s only one kind of earth, this Earth. In the whole cosmos, we are the only one unique humans and there’s no other. And this earth is also the one unique Earth, and there’s no other. All humans who have sinned have been exiled nowhere else in the universe but only here on earth. We don’t belong here, we belong to heaven. But as exiles, our intention is to satisfy Divine Justice, i.e., we must pay for our sins, this as we set sights to our ultimate goal of reconciliation with the Father in heaven.

NOTE:- – Mga kapatid, don’t be awed by the technologies and magic of the ETs, don’t be mystified by the wonders of the cosmos, these are the endeavors of Satan to distract us, to lead us astray away from God. Mga kapatid, this universe, this world is not the way to God. Jesus was explicit on this when he triumphed the third temptation where he was offered all the kingdoms and all the splendors of the world. Our goal is to escape from this world. The way to God is to disengage from this world, and focus on yourself. KNOW YOURSELF. Sanctify yourself and make reparations for your sins.

And now, these pagan symbolisms are more and more embedded in the latest of their buildings.

And the inside does match the outside.

And it’s not only in their architecture, the Vatican people actually live it, and breathe it.

Thank God, the angels of the Lord are still in control of the situation. God has not yet allowed all hell to break loose. But it’s coming. Bluntly and clearly, Apostle Paul has warned us of this day.

” Put on the full armor of God, so that you can take your stand against the devil’s schemes. For our struggle is not against flesh and blood, but against the rulers, against the authorities, against the powers of this dark world and against the spiritual forces of evil in the heavenly realms. Therefore put on the full armor of God, so that when the day of evil comes, you may be able to stand your ground. Stand firm then, with the belt of truth buckled around your waist, with the breastplate of righteousness in place. Take the helmet of salvation and the sword of the Spirit, which is the word of God.” – Ephesians 6:10.

Soon, it will be the “Lord of the Rings” in real time. So who will be the REX MUNDI???… Is it the Vatican-Jesuits or Queen Elizabeth?… the Rothschilds or the Rockefellers?… the Pentagon-CIA-NSA or somebody else? . . . Mga kapatid, the long and continuing saga of man’s pilgrimage to salvation is about to end. Watch out, look around, the signs are glaring. Wake up!!! Many will perish along the road.

But first and foremost, Francis must destroy the Catholic Church and put in place the One World Religion. Indeed, the lynchpin of everything NWO is this One World Religion of Francis. Their ultimate goal is to enslave all of the humanity.

You, Catholics of the world, be steadfast, we are now in the last days. Jesus is coming to separate the sheeps from the goats, and to gather the grains from the chaff. . .