Mga kapatid, the prophecies are now coming true – we are in the last days.

“. . Satan has been introduced into the bosom of the Church, and he will in a very short time come to rule a false church. . . this is the great apostasy“. 2017, Nov 16 [vaticancatholic.com] – Saint Padre Pio: “Satan Would Come To Rule A False Church” – YouTube: 2 mins —

“. . how many times has the renewal of the Church sprung from blood! This time, too, it will not be otherwise. We must be strong and prepared, and trust in Christ and His Mother, and be very, very assiduous in praying the Rosary.” Pope John Paul II in Fulda, Germany – [1980 November]

“. . for in the last days JESUS will send not a true pastor, but a DESTROYER.” The Prophecy of St. FRANCIS Of Assisi about the Future Pope

But of course the Vatican did try hard to suppress the above prophecies, not just because they expose their rottenness, but also because they pose problems to their aim of global domination. Though they failed many times, they have been totally successful in this one: the prophecy of Our Lady of La Sallete about the coming of “two-worm ridden popes in the last days.”

This exhortation obviously happened during the papacy of John Paul II. There are valid reasons why Fr. Hesse said that: because these two popes [John Paul II and Paul VI] have done a number of “heresies”. Hesse must be unaware that these popes’ hands were tied, its the Jesuit-Freemasons holding their necks and controlling them. The Freemason Cardinals Casaroli, Villot, and Bernelli even substituted Paul VI by a talented actor, a heavily ‘plastic-surgeoned’ impostor, until his murder by the Jesuits in 1978. – Deception of the Century: Impostor Replaced Pope PAUL VI in 1972 – [rfeeles1] . . .[More on this later.] 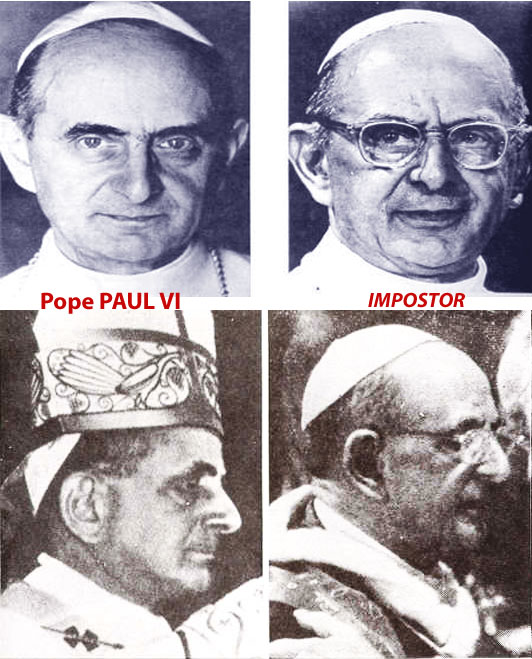