China is the First Domino to fall.

Now the floods, the deluge! For more than forty days and forty nights, 27 of China’s 31 provinces, i.e., 70% of China mainland has been underwater, a flood of biblical proportions. Thanks to the Illuminati. These henchmen of Satan are now proceeding earnestly in their ultimate goal of world domination. They first targeted China because of its huge population, nasty leaders with bloated egos, and its prominent Achilles’ heel: the Three Gorges Dam.

This is a conspiracy to cut out China and the Chinese Communist Party (CCP). The Illuminati’s focus is the Three Gorges Dam (TGD). They are purposely pounding the area with heavy rains to cause huge floods, and also some ‘sprinkle’ of small earthquakes on the periphery to gradually weaken the TGD. They are using their most powerful weapon, the H.A.A.R.P.   Along the Yangtze River, 1,000 miles from TGD to the premier city of Shanghai on the east coast are some 400 million people. When the TGD collapses, surely the destruction will be worse than that of a nuclear bomb. This devastation will linger for sometime, to follow are hunger, disease, and famine. – H.A.A.R.P. :- 2017-Nov-9 [thefreedomarticles.com] The Ultimate Weapon of the Globalists

Xi Jinping and his comrades in the CCP are now hiding and nowhere to be found. They are running for their lives. The titans of the Illuminati consider all the CCP hierarchy as simply “pawns” and as such, are deadweights and disposable. The CCP have enjoyed their heydays, they have basked in wealth and power, they have delighted in the nicest things on earth, well then, that’s enough. All heydays don’t last forever. They will have the same fate as those of other Illuminati pawns like the billionaire Jeffrey Epstein who was “suicided” while in prison, or the trillionaire Muammar Gaddafi who was killed ordinarily, or they will just simply disappear. Similarly, this is bound to happen to all those other pawns who trashed the humanity for their own glory – Obama, the Clintons, the Bushes, Biden, Macron, Merkel, Trudeau, Blair, etc…

After China, the next dominos to fall are those of the G20 countries of Europe, America, and Japan.

Xi Jinping and his comrades have grown much bigger, with bigger “egos and requirements”. For the Illuminati, they have become “irritating and bothersome”, so now they have to be eliminated. That’s a good thing for the Philippines because that included this bullshit bully Wang Yi, the Chinese foreign minister who, two years ago, with a brave face, flatly declared without blinking that Benham Rise and the Eastern Philippine Sea are Chinese territory. He was also short of hinting that soon the Philippines will be a province of China. 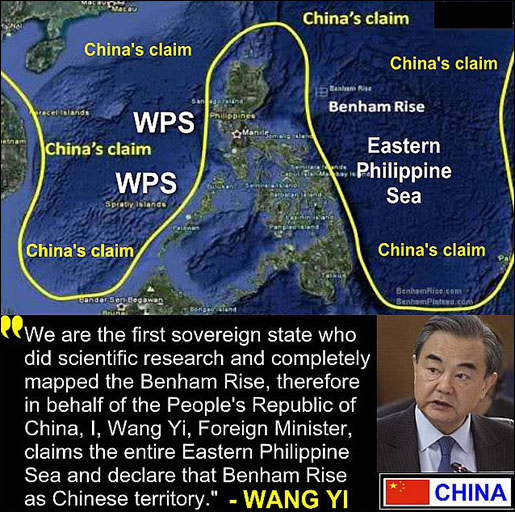 Wang Yi the bully is now on the run, he can’t be found. I think this 66-year old toughie must be hiding behind his mother, with his tail in between his legs.

There are now many Chinos working here in Manila, possibly half a million more or less, from the mainland. They work mostly in ‘overseas gaming operations’, also some are in restaurants as cooks and waiters, and a handful are in the construction industry as engineers, masons, and carpenters and thus displacing many Filipinos of jobs. Frankly a few times, I have personally experienced first hand how bully and rude these Chinos are while riding the jeepney in Parañaque and Las Piñas. They are so discourteous and disrespectful, that you can easily get the impression that they consider themselves superior than the Filipinos. With these developments in China, sure there will be changes.