MGA KAPATID, the Vatican and Pope Francis are now the front and center of this Luciferian-Masonic crusade to destroy the Catholic Church and the whole Christian faith. Francis is a true blood-oath Mason, a master of deceit: he’s consistently and surreptitiously sowing confusion, dissension, and moral corruption into the Church, the endtime aims of Freemasonry. Unknown to most of the clergy, it is now SATAN that rules the top hierarchy of the Church, this I’m speaking before our Lord and Saviour Jesus Christ. I enjoin you to please spread this word to all believers in Christ, and to all the people, as such will please our LORD. Mga kapatid, time is getting shorter by the day, so I say:

“. . for in the last days JESUS will send not a true pastor, but a DESTROYER.” The Prophecy of St. FRANCIS Of Assisi about the Last Pope

“Above all things, Jesuits are ‘confessors’. Their services unto the royalty were urged as a ‘need’, as they became assigned to hear the confessions of the aristocrats, emperors, kings, queens, princes, princesses, [‘royal’] mistresses, those in every level of government – they all revealed their secret plans, their intimate sins, their inner-most thoughts, as their lives became virtually an open book to the Jesuits.
. . . Through various means of diplomacy, Jesuits worked their way into offices of State, climbing up to be the counselors of kings, and
shaping the policy of nations. But it was religion and its sacred duties of hearing the confessions of their penitents, and being their ‘religious wise guides’, [Ed. Note: especially to the rich and power elite] instead of the other orders of priests, by providing a most ‘attractive policy of leniency as an enticement’ for their penitents.”John Daniel (Author of the book The Grand Design Exposed)

What Goes Inside The Confession Box? 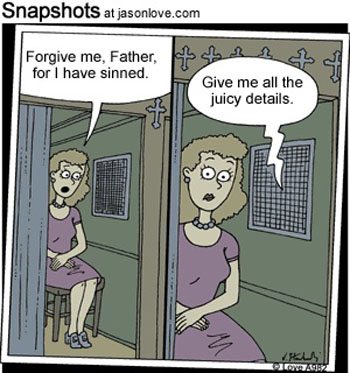 2018, May 21 – “Too many MARRIED women, too little time.” – THE MANILA TIMES — The death of Fr. Mark Anthony Ventura, parish priest of Gattaran, Cagayan province – Duterte said “he has affairs with eight married women.” If that’s true, this ‘predator-priest’ must have seduced these ‘unhappy’ wives inside the confession box, where else?

2018, Jun 28 – Kerala Church Scandal: SIN in the BOX – outlookindia.com — In Kerala (India), priests blackmailed woman for sex after confession, resulting in her being exploited for years.

According to the Bible, who are those authorized to render judgement?

“. . I saw thrones on which were seated those who had been given authority to judge;
. . The dead were judged according to what they had done as
recorded in the Books.“ — Revelation 20:4,12

“When you pray or confess, go to your room, close the door, and pray to your Father who is unseen, for HE sees EVERYTHING that is done in secret.“ — Matthew 6:5

Indeed those who were given authority to judge reside in heaven, and they judge forthrightly based on what is written in the Book Of Life. These guys have no other agenda or needs – [ they are already in heaven, so what more can they ask? ] – so they can’t be influenced by anything. If God has given any flesh and blood here on planet earth the authority to judge, then he must be in possession of a copy of the Book Of Life. For how can a priest render unimpeachable judgement when he doesn’t have the facility or the means to “see EVERYTHING that was done in secret”? When a priest enters the confession box, whatever he does inside, whether to serve the Jesuit-Vatican agenda, or for his own personal benefits, that’s his own personal business. God has nothing to do with it.

And now here comes satanic Francis drumbeating the “Year Of Mercy – 2016” by allowing all priests to forgive the sin of abortion. “Any Catholic priest can grant forgiveness to a woman who has had an abortion. I wish to restate as firmly as I can that abortion is a grave sin, since it puts an end to an innocent life. In the same way, however, I can and must state that there is no sin that God’s mercy cannot reach and wipe away when it finds a repentant heart seeking to be reconciled with the Father.” . . . Hehehe, so sweetly crafted words, so semantically beautiful it effectively camouflages his sinister scheme – to deceitfully assure the sinners and would-be sinners of salvation. With Francis, no one seems destined for hell, everyone is assured of heaven.

FYI:- His statement that “there is no sin that God’s mercy cannot reach” is an outright LIE. The Bible says: -[ “people can be forgiven all their sins and every slander they utter, but whoever blasphemes against the Holy Spirit will never be forgiven; they are guilty of an eternal sin.” — Mark 3:28 ]-. And it’s even reiterated by Sister LUCIA of Fatima.
About how serious a sin abortion is, it was mentioned by
Sister CONCHITA, the seer of “Our Lady Of Garabandal”.

But what and how is a “repentant heart”? . . Yes indeed God forgives, but it always depends on the “genuineness” of the repentant heart. It is said that “not all that glitter is gold”. Can Pope Francis distinguish whether the repentant heart is “gold or not”? How does he gauge it? Is his “forgiveness” absolute, i.e., approved without a doubt in heaven? Does God have the option to reject it? If not, then Francis and his priests are pre-empting God, essentially tying HIS hands, and so they have become as gods!. Indeed these mortal creatures [Francis and his priests] from this tiny planet earth masquerade as if they are as mighty as the CREATOR of the universe. These mortal creatures decide the fate of all the other creatures on earth.

2017, Mar 16 [itccs.org] – Pope Francis Exonerates Thousands of Priests Convicted of Child Rape – by Kevin — ” on May 13 Pope Francis, with a simple sleigh of his magic wand, ‘absolved’ over two thousand predator-priests who have raped and/or killed children, including a serial criminal with HIV; . . . its the Vatican’s definition of child rape not as a crime but a mere “sin” that constitutes a hate crime and an incitement to violence against children.”

Who Among The Prophets, Apostles, And Saints Did Forgive Sins?

None. Not anyone of them. Not even Padre Pio, the one with the genuine stigmata and immaculate body; not even John the Baptist, the one who prepared the way for Jesus, the one who is “the prophet of the Most High” -[ Luke 1:76 ]- ; and not even the Mother of Jesus, Mary the Blessed Mother.

FYI:- You may examine the prayer Holy Rosary to find that its only the Father and the “Lamb of God”, or Jesus, who can forgive sins. The Blessed Mother only intercedes between us and Jesus. The Holy Rosary presents us the “chain of command” and the “proper protocol”. You can’t go directly to Jesus, you need a “lobbyist” to escort you to Him, and the Blessed Mother is the best – also the Saints and the Apostles, and your guardian angel. -[ actually some people are already “privileged” to go directly to Jesus and not needing anymore ‘intercession’, but they are those who really have shown genuine devotion for let’s say twenty years. In short, you must already be “so saintly” to do just that. ]-

Truly this Masonic Francis is grandiose in lying and pretending. How could he be ‘higher’ than Padre Pio and John the Baptist? These Saints indeed have done ‘sign and wonders’, while Francis have yet to show even one. Its death and destruction that accompany him, not signs and wonders.

Judges in the Court Of Law are chosen for their probity and expertise. But despite that, they still commit mistakes – some innocents are jailed, while some guilty ones are freed -[however, if mistakes are found, they are somehow rectified]-. Because all these judges are just humans, they simply are not infallible. But how about Francis – is he infallible? What happens to those he has forgiven that later turned out to be a mistake?

“. . . a bishop, who manages God’s household, must be blameless, upright, holy and disciplined.”
Titus 1:7

OK, let’s say Pope Francis is blameless and infallible. . . Hmmm, but wait, . . what is this? – there is noise among priests calling for his resignation, and the noise grows louder by the day.

2018, Aug 27 (FoxNews: Laura Ingraham) – Catholic Leaders Call on Pope FRANCIS to RESIGN! – YouTube: 3 mins — “I want to unload my conscience before I die,” said the 77-year old most respected, man of integrity, “sharp-shooter” Cardinal Vigano as he accusses Pope Francis of dishonesty. Strangely enough, this man Francis, the Highest priest on this planet, the foremost vanguard of Truth – watch his body language as he gives evading answers, obviously he’s hiding things . . . you be the judge.

Mga kapatid, truly we are in the last days – the prophecies are now coming true.

“. . .The work of the devil will infiltrate even into the Church in such a way that one will see cardinals opposing cardinals, bishops against bishops;
. . . the Church will be full of those who accept compromises and the demon will press many priests and consecrated souls to leave the service of the Lord.”

“. . . Then scandals will be multiplied, and many will be entirely destroyed, because they will consent to error instead of opposing it;
. . . Some preachers will keep silence about the truth, and others will trample it under foot and deny it;
. . . Sanctity of life will be held in derision even by those who outwardly profess it, for in those days Jesus Christ will send them not a True Pastor, but a

Indeed scandals are multiplying, cardinals are opposing each other because many of them are consenting to errors, while others are making compromises.

Scroll back to top